Red Bull’s Max Verstappen won the Azerbaijan Grand Prix on Sunday, as his world championship rival Charles Leclerc was forced to retire from the lead. 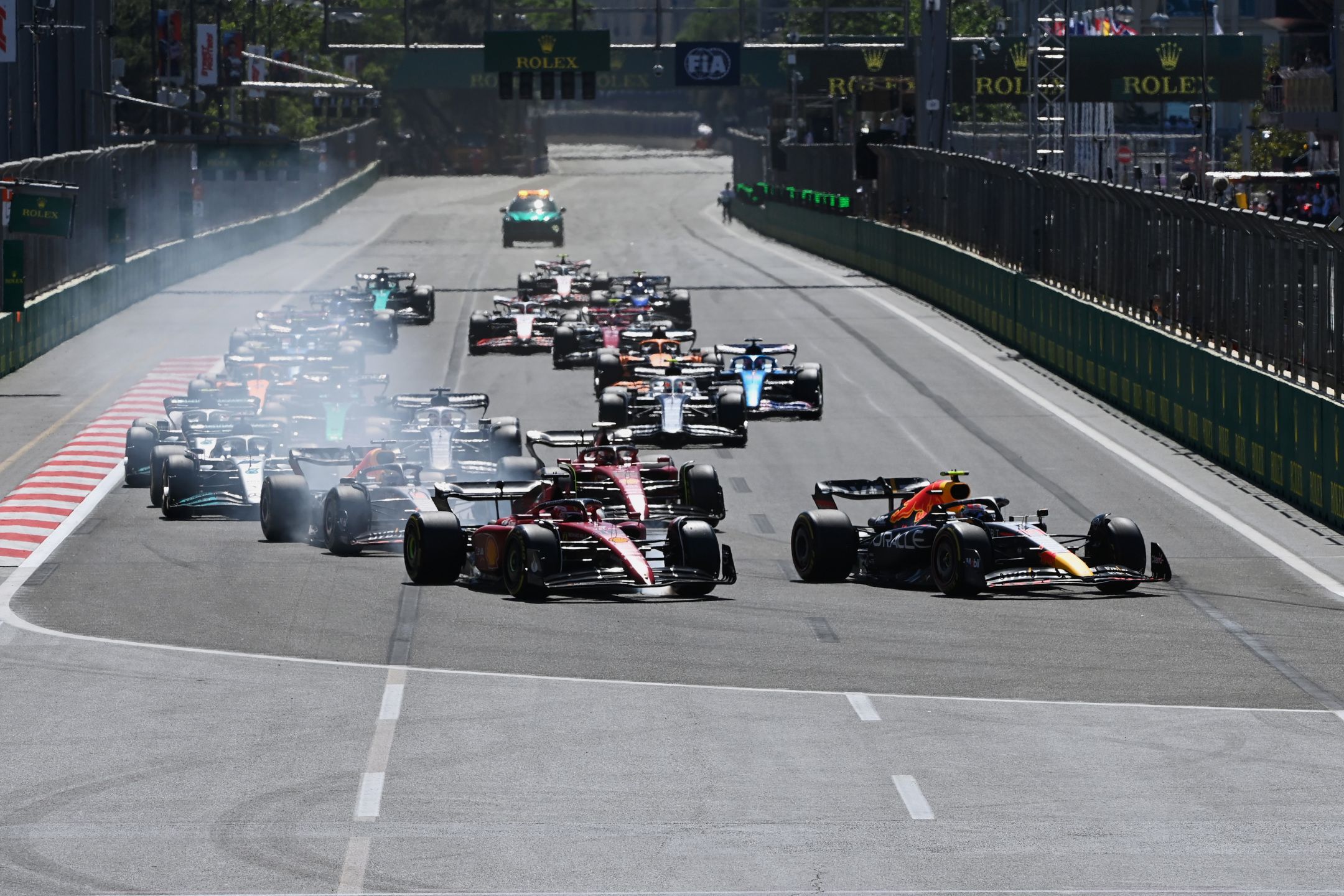 Ferrari’s Leclerc – who pitted early under a virtual safety car caused by teammate Carlos Sainz’s retirement – was leading the race when his power unit failed after 20 laps.

Red Bull’s Sergio Perez had taken the lead at the start from poleman Leclerc and held it until teammate Verstappen passed him on Lap 15, both Red Bulls then pitting and allowing Leclerc back in front until his retirement soon after.

That gifted an easy win to Verstappen, who pulled well clear of Perez, to extend his world championship lead.

How the Azerbaijan Grand Prix unfolded
Leclerc held his pole advantage on the short run to Turn 1 but Perez lunged ahead of him at the first corner to take the lead. Verstappen had to defend from Sainz at Turn 3 but maintained third. Mercedes’ George Russell was best of the rest, ahead of Pierre Gasly (AlphaTauri), Lewis Hamilton (Mercedes) and Sebastian Vettel (Aston Martin).

Perez extended a 2s lead by the time DRS was activated, while Verstappen began to pressure Leclerc for second on Lap 5. Perez complained of a lack of traction but maintained his advantage over the warring Leclerc and Verstappen.

Sainz then pulled off at Turn 4 with a hydraulic failure on Lap 9, causing a virtual safety car that Leclerc, Russell, Hamilton, Vettel and Yuki Tsunoda (AlphaTauri) decided to pit under. Leclerc suffered a slow stop, while Hamilton lost a place to Vettel having stacked in the pits behind Russell.

Perez led Verstappen 2.3s as the race went green, with Leclerc in third on fresh hard tyres but 13s back.

Verstappen reeled in Perez and passed him for the lead at Turn 1 on Lap 15, while Leclerc was catching them both on his new rubber. Perez pitted for fresh hards on Lap 17 and also suffered a slow stop and rejoined in third, just ahead of Russell.

Verstappen stopped on Lap 19, meaning a nine-lap fresher tyres advantage over Leclerc as he rejoined 13s behind him. But Leclerc’s race ended soon after when his power unit failed at the end of Lap 20 and he smokily toured into the pits.

Verstappen led by over 6s by half distance and further extended the gap in the second half of the race.

Kevin Magnussen’s Haas ground to a halt on Lap 33 causing a virtual safety car. Verstappen, Perez, Russell and Hamilton stopped again, with Gasly and Tsunoda staying out, the latter gaining a spot from Hamilton.

Hamilton quickly regained fifth from Tsunoda, the latter then suffering a DRS flap failure. He pitted for some hasty repairs, and was told not to use DRS again, but was now 13th. Hamilton passed Gasly for fourth on Lap 44.

Vettel finished sixth, despite a trip down an escape road. He had tried to pass Esteban Ocon’s Alpine at Turn 3 early on but overshot the corner and had to spin turn, dropping to 12th. It took him over 10 laps to catch and pass Ocon properly but, in the long run, his misadventure only cost him one place to Hamilton.

Fernando Alonso (Alpine), the McLarens of Daniel Ricciardo and Lando Norris, and Ocon rounded out the point scorers.