Ryan Preece has only limited starts in the NASCAR Truck Series but both his victories have come at Nashville (Tenn.) Superspeedway. 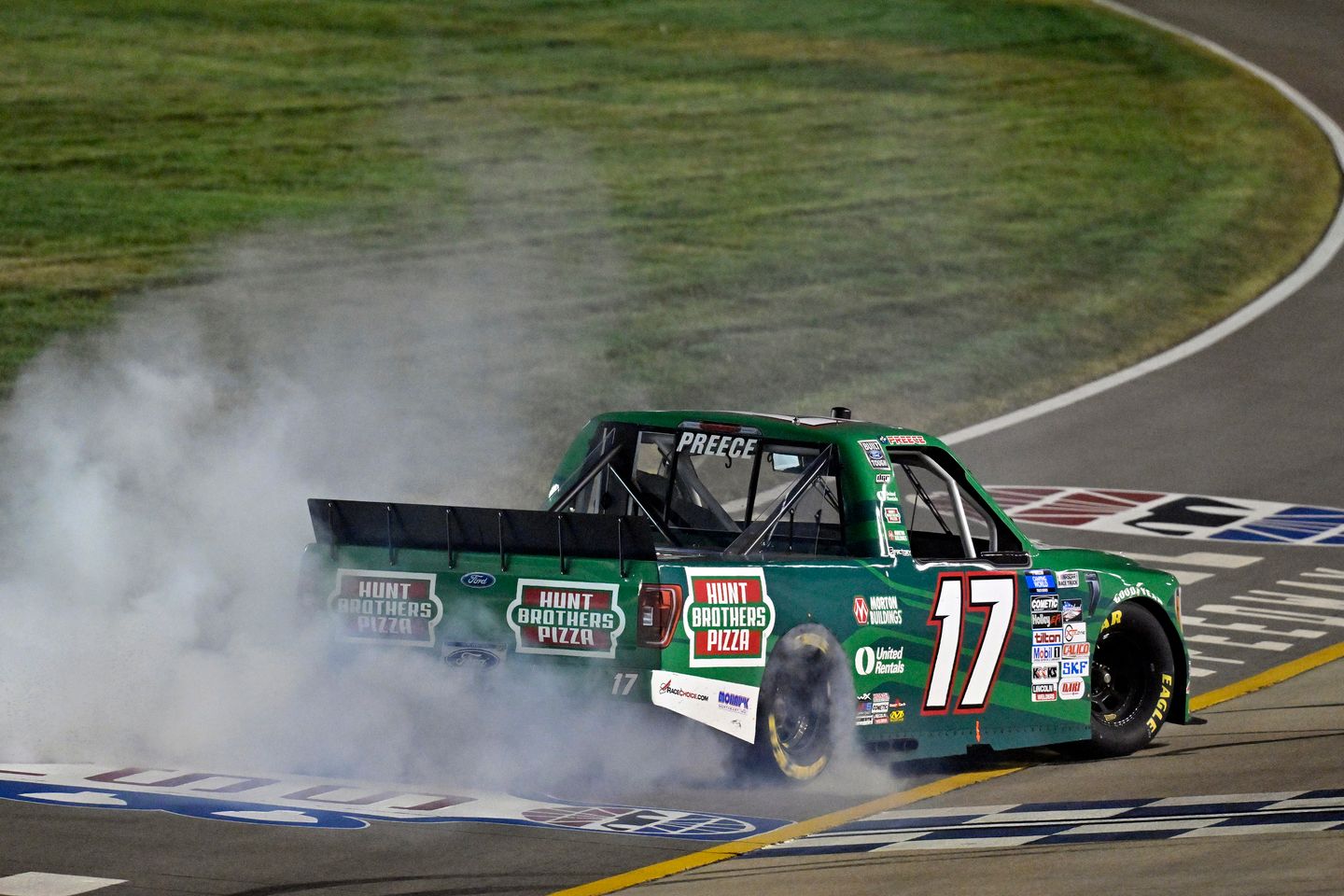 Preece, making just his eighth career start in series, held off a hard charge by Zane Smith in the final two laps to win Friday night at Nashville for the second consecutive season.

The win is also the second consecutive for David Gilliland Racing, which won last week’s dirt race at Knoxville, Iowa, with driver Todd Gilliland in the No. 17 Ford.

With the win, Preece also collected a $50,000 bonus as part of the Triple Truck Challenge.

“I didn’t want it to be that close (at the end), But my hat’s off to DGR and all the crew for this one,” Preece said. “We won a second guitar – I might have to start a band!

“I’m just proud to be the one holding the steering wheel.”

Gutierrez was making just his second series start and will race Saturday in his home country of Mexico.

Stage 3
Following the break between Stages 2 and 3, the lead-lap trucks all pit with Parker Kligerman the first off pit road thanks to a two-tire pit stop.

When the race resumed on Lap 103, Kligerman was followed by Preece, Zane Smith and Friesen.

Preece powered past Kligerman on the inside to return to the lead on the restart.

Todd Bodine spun off Turn 4 and down the frontstretch on Lap 119, which brought out a caution.

A handful of trucks pit but Preece remained on the track and in the lead when the race returned to green on Lap 125.

While racing four-wide in Turn 3 on Lap 127, Corey Heim, Grant Enfinger and Matt DiBenedetto all hit the wall.

On the restart on Lap 136, Preece remained out front followed by Eckes, Zane Smith and Friesen.

Just after the restart, Hailie Deegan wrecked entering Turn 1, bringing out the eighth caution of the race. Colby Howard was also caught up in that incident.

Preece continued to lead when the raced returned to green on Lap 141.

With eight laps to go, Zane Smith moved into second and set his sights on Preece.

Stage 2
Preece grabbed the lead on a late restart and easily held off Zane Smith to earn the Stage 2 win.

Heim was third, Eckes fourth and Friesen rounded out the top-five.

Following the break between Stages 1 and 2, all the lead-lap trucks pit with Majeski the first off pit road. Jesse Little was penalized for an uncontrolled tire during his stop and had to restart from the rear of the field.

On the restart on Lap 54, Majeski was followed by Zane Smith and Preece.

Zane Smith quickly powered back into the lead on the restart.

Tanner Gray hit the wall on Lap 61 with a flat tire and was forced to pit under green for repairs.

On Lap 69, Nemechek spun on the backstretch after contact with Hocevar to bring out the fourth caution of the race.

Several trucks elected to pit but Hocevar was penalized for speeding on pit road and had to restart from the rear of the field.

When the race resumed on Lap 74, Zane Smith led the way but Preece jumped out front right after the restart.

Heim was third, Friesen fourth and Chandler Smith rounded out the top-five.

Preece started on the pole but Zane Smith quickly powered to the lead on Lap 1.

On Lap 8, Jack Wood spun after contact with Crafton and wrecked in Turn 4, which brought out the first caution of the race.

The race returned to green on Lap 14 with Zane Smith out front followed by Preece and Hocevar.

Camden Murphy wrecked in Turn 2 on Lap 20 to place the race back under caution. Zane Smith continued to lead the way on the restart on Lap 25.

Gutierrez started the race from the rear of the field after failing post-qualifying inspection and unapproved adjustments.

Gray had to start the race from pit road after fueling his truck before the green flag.