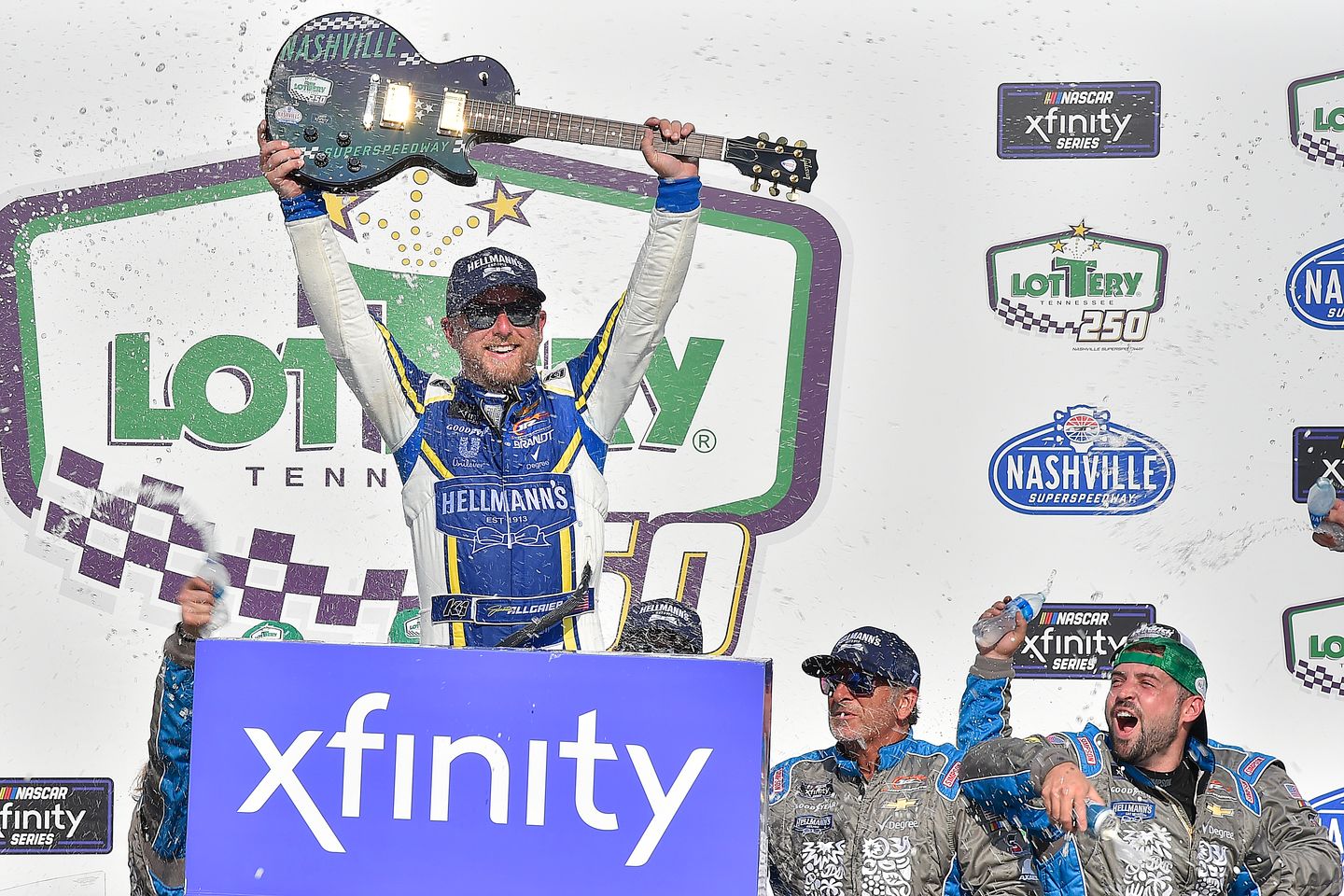 Allgaier found his way to the front early, won the first two stages, led 134 of 188 laps and easily topped Trevor Bayne by 4.513 seconds to claim the victory.

Several top contenders elected to wait until late in the final stage to make their final pit stop for tires and fuel, but Allgaier was among the group that pit under caution as soon his No. 7 JR Motorsports team was within its pit window.

On new tires he ran down then-leader A.J. Allmendinger to reclaim the lead on Lap 149 and led the final 40 laps, which went caution-free.

The win is Allgaier’s second of the season and 19th of his career.

“What a heck of a race,” he said. “I’ve been coming to this track a long time and I’ve been trying to get to Victory Lane so bad and just haven’t been able to do it.

“Today was for the dirt racers, though. It was slick. It was hot. Just sliding around. … That was the best car I’ve ever had. This is just so much fun right now.”

“Overall a good day,” Herbst said. “Had a shot there to win but (Allgaier) was good, congratulations to that team.”

Allmendinger, who led 48 laps but pit under green with just under 20 laps to go for fuel, finished 16th.

Stage 3
Following the break between Stages 2 and 3, the lead-lap cars all pit with Gibbs first off pit road. Mayer and Anthony Alfredo were both penalized for speeding on pit road and had to restart from the rear of the field.

On the restart on Lap 97, Gibbs was followed by Allgaier, Bayne and Noah Gragson.

Allgaier powered around the outside of Gibbs to grab the lead on the restart only to see Gibbs reclaim it on Lap 99.

Allgaier then maneuvered his way back around Gibbs on Lap 100 and began to put some distance between the two.

On Lap 105, Josh Berry spun in Turn 2 and also collected Preece in the process to place the race under caution.

A handful of cars pit but Allgaier remained on the track and in the lead when the race returned to green on Lap 110. He was followed by Gibbs, Bayne and Brandon Jones.

Earnhardt spun in Turn 4 on Lap 116, which brought out the fourth caution of the race. Most of the lead-lap cars elected to pit with Alfredo the first off pit road taking fuel-only.

Allmendinger remained on the track and inherited the lead. He led the way on the restart on Lap 123 followed by Jones, Gragson and Daniel Hemric.

On Lap 124, Sheldon Creed spun and collected the cars of Jeb Burton and Joe Graf Jr. in the process, to place the race back under caution.

The lead-lap cars stayed out and Allmendinger led the way on the restart on Lap 131 followed by Jones and Gragson.

On Lap 149, Allgaier – who had pit for four new tires on Lap 117 – finally ran down Allmendinger and moved back into the lead.

With 20 laps remaining, Gragson was the first among those drivers who needed fuel to make it to the finish to pit under green. Tyler Reddick, Jones, Hemric and Allmendinger soon followed.

With 10 laps to go, Allgaier led Bayne by 3.9 seconds as Herbst ran third and Gibbs fourth.

Stage 2
Allgaier completed a sweep of the first two stage wins, easily holding off Gibbs to give JRM its 12th consecutive stage victory on oval tracks this season.

Mayer was third, Herbst fourth and Bayne rounded out the top-five.

Following the break between Stages 1 and 2, the lead-lap cars all pit with Allgaier first off pit road.

Five drivers – Allmendinger, Creed, Landon Cassill, Hemric and Kyle Sieg – were penalized for speeding during their respective stops and all had to restart from the rear of the field. Jeb Burton was also penalized for equipment interference and was sent to the rear.

On the restart on Lap 53, Allgaier was followed by Josh Berry, Jones and Gibbs.

With 25 laps remaining in the stage, Allgaier maintained a steady lead over Gibbs as Mayer ran third.

With 10 laps to go, Allgaier had expanded his lead over Gibbs to 1.2 seconds with Mayer third, more than 4 seconds behind the leader.

Herbst was third, Allmendinger fourth and Hill rounded out the top-five.

Herbst started on the pole but Allmendinger jumped out front to lead Lap 1.

On Lap 19, Allgaier dove under Allmendinger in Turn 3 and came away with the lead for the first time in the race.

With 20 laps remaining in the stage, Allgaier had built a 1.6-second lead over Allmendinger while Herbst ran third.

With five laps to go, Allgaier lead had expanded to 6.1 seconds over Bayne as Allmendinger dropped to fourth.

Reddick (engine change) and Natalie Decker (unapproved adjustments) both had to start the race from the rear of the field.