Ducati’s Alvaro Bautista says a “small mistake” at the Goddards left-hander caused him to crash out of the opening World Superbike race at Donington Park on Saturday. 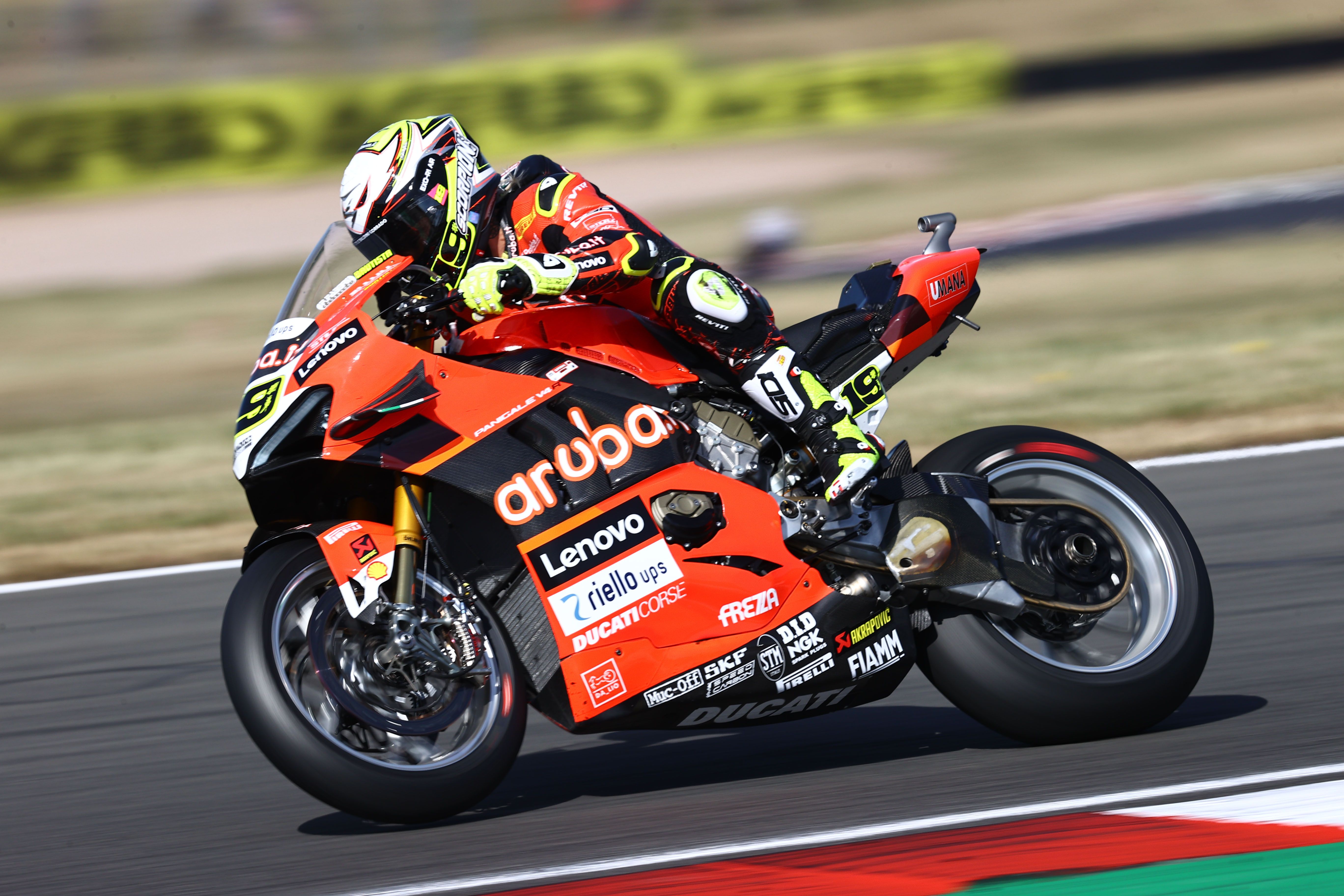 Bautista was engaged in a long battle for second position with Kawasaki’s Jonathan Rea in the 23-lap contest at the British venue, the two dueling for the best-of-the-rest spot behind Yamaha’s Toprak Razgatlioglu.

Bautista was running just ahead of Rea with nine laps to go when he lost control of his Ducati on the entry to the final corner, leaving him on the ground and allowing Rea to snatch second position.

The Spaniard was able to hop back on his damaged bike but eventually pulled into the pits to retire, suffering his first DNF of an otherwise error-free season in which he has largely had the edge over title rivals Rea and Razgatlioglu.

Taking full responsibility for the incident, Bautista said: “I was in front in the last corner, it is always a tricky corner because it's so bumpy, many times you don't use the same line, it depends how you take the bumps. You can enter one way or another.

"That time I braked so hard and maybe I had more lean angle and I lost the front when I touched a bump and I crashed. Fortunately I am ok, no injuries.“

Bautista, however, was pleased with the step Ducati had made since Friday practice at a track it hasn't won at since Carlos Checa's triumph in 2011.

“It was a big pity because we knew we would struggle a bit at this track, but I am quite happy because we worked well all weekend, today I felt better than yesterday with the bike," he said.

“We found some small change in the bike and I felt an improvement, the feeling was much better than yesterday. I was confident on the race pace because in the fast lap we were not so strong in these conditions.” Bautista’s retirement has reduced his lead over Rea from 36 points to just 16 ahead of Sunday’s final two races at Donington, with Razgatlioglu also closing the gap to 54 points on the back of his first full-distance race win of the season.

However, Bautista is unfazed by the impact his DNF has had on his championship prospects, saying it won’t affect his approach for the remainder of the season.

“For me it doesn't change anything - I will approach the races as before,” said the 37-year-old.

“I think we have to get the maximum we can; today maybe we could have had second position but at the worst third.

“I think we have to approach the races like we did before, nothing changes for us. We try to enjoy, have a good feeling and get the maximum.”

Kawasaki rider Rea had dominated practice for his home event and claimed pole position, but was unable to keep up with the pace of race winner Razgatlioglu after passing Bautista for second on lap 7.

Rea then made a mistake at the same turn where Bautista would later crash, slipping back to third position and re-initiating their battle.

Bautista said he was surprised to find Rea wasn’t any quicker than him during the race, having shown the best long run pace of any rider in similar conditions in FP2.

“I started battling with Jonathan, he tried to pass me and he tried many times to push me out, but I was quite calm and I thought maybe he has something more than me,” he explained. “I let him go in front and [I thought] maybe we can catch Toprak.

"It was a surprise for me because I expected more [speed] from him, watching practice and the laptimes he did. He was struggling more, he had no more pace than me.

"In the end I tried to be in front because after a few laps behind him I thought my pace was a bit faster than his. I tried to pass him, but he defended to the maximum.”